How to change your story from horror to hope! 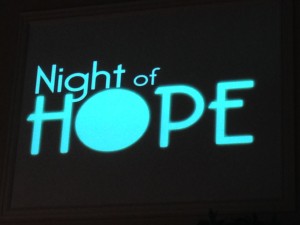 What did you do last night? I had the privilege of doing one of my favorite things. I got to be a recruiter for God’s army and call up new recruits to join the fight against sex trafficking in America.

Lost Mountain Baptist Church in Powder Springs, Georgia hosted a Night of Hope. We had a large turn out of people, young and old, eager to learn what they could do about the atrocity of sex trafficking, not in Cambodia or Thailand, but right in their own backyards.

I loved watching their faces transition from shock and horror to commitment. 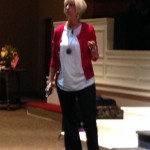 The story of sex trafficking is truly a horror story, if left alone. Women and children are pillaged night after night, between 10-30 times a night, for one person’s twisted pleasure and another’s financial gain. What could possibly be positive about that story?

If people turn the other way and go on with their lives, like so many did in the story of the Good Samaritan, then nothing [Luke 10:30-32]. But the Good Samaritan story doesn’t end with people walking away. If you read on you learn of a Samaritan man who happened by and became aware of a situation of injustice and he stepped in and made a difference [Luke 10:33-36].  But the story still doesn’t end there. Verse 37 says,

And He said, ‘He that shewed mercy on him. Then said Jesus unto him, Go, and do thou likewise.'”

Jesus told the people listening [and that includes you and me as we read the Word today] to go and do likewise. Go and do likewise. Those are powerful words. Last night the people of Lost Mountain Baptist Church took up the command Jesus gave and began to walk in it. That’s how you turn a horror story into a story of hope. 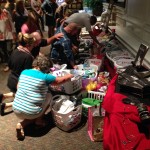 Not only did I speak at the event, but my dear friend and founder of Out of Darkness, Jeff Shaw, was there also. He shared specifically how the members could step into the injustice through Out of Darkness.

The coordinator of the event didn’t want the evening to be the first step in partnership so she had asked the church members bring in donations to make up welcome baskets for the survivors to receive when they come into the safe house, Solomon House. The baskets came in the door in droves. It was so beautiful. They prayed over them before giving them to Jeff.

When speaking, I shared how so many of the front line organizations aren’t just under staffed and in need of volunteers, but that they’re also under funded. People stuffed hundred dollar bills and checks in Jeff’s hands following the message. This didn’t just provide hope for the women coming out of the trade, but it also filled Jeff with hope that the Lord would provide for what he needed to do the work God called him to do [Hebrews 13:20-21]. God demonstrated 1 Thessalonians 5:24,

People were asking for copies of my book, Rescuing Hope, so they could learn even more about the issue and possibly start book clubs to educate their friends. 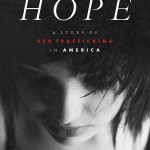 What is God calling you to do? What’s stopping you? Is it that you don’t think you have what it takes? You don’t need to because He’ll equip you.

Are you in the midst of a horror story in your life? Fear not, God is able and willing [Ephesians 3:20]. Let Him turn your horror story into a story of hope.