Have you ever thought about it? 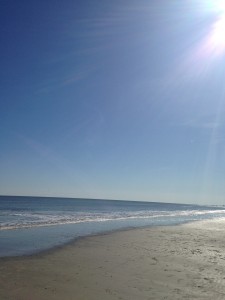 Where do you meet with God? Do you do so in a certain room or chair in your house? Or are you more the outdoor type of person who meets with Him in nature? I can always connect with God at the beach or in the mountains; however, as far as day to day I have a favorite chair in my house where I like to have my morning quiet times.

More often than not, God likes to have His most profound conversations with me in the shower. Some people sing in the shower, I talk with the Lord there.

I have recently been asking for wisdom and direction on some decisions I have to make. I take James 1:5 to heart when it says,

If any of you lacks wisdom, he should ask God, who gives generously to all without finding fault, and it will be given to him.”

Many times when I do this, I will read about some of the wise men of the Scriptures to get their take on things. Nehemiah and David are two that I turn to frequently, but Monday I turned to Daniel.

I started reading what Daniel had to say in chapter 1 where we learn Daniel is in captivity and he is asking the chief official in charge of him if he and his friends could abstain from eating the king’s food [Daniel 1:8]. The chief official is afraid of the king and doesn’t want to do anything to go against his orders, but Daniel, having favor, convinces the king to give them a trial run with eating vegetables instead of the rich foods [Daniel 1:10-13]. At the end of the test period, Daniel and his friends looked stronger and healthier than the others who ate the royal food, so the chief official was okay with his dietary request.

To these four young men God gave knowledge and understanding of all kinds of literature and learning. And Daniel could understand visions and dreams of all kinds.:

Knowledge and wisdom were two things I was asking God for, so I started chewing on that verse in particular (no pun intended). I felt like there might be more to this than actual food. I woke up thinking about it yesterday and asked the Lord if I was missing anything. When a verse or segment of Scripture continues to weigh on my mind, I know the Lord is trying to tell me something.

The king’s food, referred to in some translations as royal food or rich food, was likely the delicacies of the day. There was even a reference of this food being rich. Daniel said, in verse 8, he wouldn’t defile himself with it. That could mean it was pork or some other food that wasn’t kosher, but we don’t know for certain. At the very least, it was something Daniel didn’t feel was honoring to the Lord. The vegetables were basic. They hadn’t been altered or manipulated. They were recognizable.

Have you ever considered that the king’s food could represent the world? It takes the truth and then it alters it just a little to make it not only more palatable to many but even desired. Yet when consumed, it makes people sluggish, tired, and lackadaisical. Think about how you feel after eating a meal of rich foods. You’re ready for a nap, aren’t you.

If the king’s food represents the world, then the vegetables – untainted and in their natural form- would represent God’s truth, unchanged, unhindered.

If you look at verse 17 in light of this, it makes perfect sense. When Daniel and his friends feasted on the truth, they gained knowledge, understanding and were able to make wise decisions. They were healthy and strong.

Now I don’t think God is saying never eat meat or something rich here. Obviously, He wants us to take good care of ourselves and eat a healthy diet so we’re able to do what He’s called us to do. But I think He’s more concerned with the diet we feed our minds and spirits. What are you feasting on today? What are you feeding your mind and spirit? Is it the delicacies of the world that says “If it feels good, do it!” Or is it on the Word of God that calls us to be set apart from the world?

You know how the saying goes,

You are what you eat.”

What are you feasting on today?