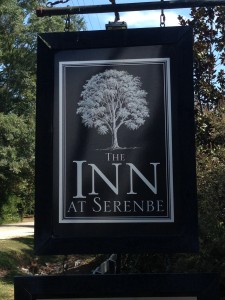 Have you ever been to Serenbe Farms in Chattahoochee Hills, Georgia? It is a quaint little farm with an inn and several cabins for rent. They have horses, goats, sheep, donkeys, pigs, chickens, and that was just what I saw while I was there.

They also have a massive garden where they grow most of what they serve in their restaurants in the community. The community is made up of restaurants, boutiques, a general store, a school, parks, and residential homes, among other things.

Two of my good friends share the same birthday, so we made the trip to Serenbe for a night to have some down time and enjoy the scenery. As you can see, it is quite a restful place. 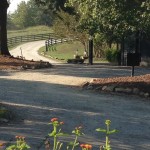 There are acres and acres of places to walk and/or drive and explore. We tried to see everything in our less than 24 hours on the property.

We had a lovely birthday dinner at a restaurant in the community called the Hill.  They specialize in farm to table meals, using what they grow right there on the property. The food was outstanding. The company was even better. I feel certain the other patrons in the place tired of our explosive 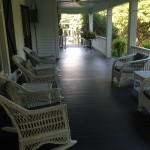 waves of laughter that seemed to cascade one right after another. I don’t know when I’ve laughed so hard. There’s just something refreshing about good food and fellowship that blesses the soul.

When we finished dinner, we drove back to the cabin and decided to take a walk. It was a beautiful night.

The stars seemed to be endless, which was just one benefit of leaving the city for a while.

As we were returning to our cabin, I stumbled upon a spider 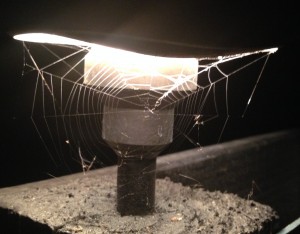 web that was stretched across the lamp outside. It was so extricate.  There seemed to be hundreds of strings going from place to place, yet they were almost invisible to the eye.

If I hadn’t been looking so closely, I might have missed it.

Let’s face it, we have all walked into a spider web of two. There’s a saying going around on Facebook right now that says:

There’s no better karate instructor than a spider web in your face.”

You can get tangled up in a spider web in a hurry and it’s hard to get it off of you.

Oh what a tangled web we weave when first we practice to deceive.”

A spider uses its web to capture it’s prey and keep it from being able to escape so it can be destroyed. The way to avoid being captured is to be alert at all times, watching where you’re going.

Deception is just one sin that operates like a spider web. It lures you in until you’re stuck and if left unchecked, it will destroy you. The way you avoid it is by being alert at all times, watching where you’re going. 1 Peter 5:8 says,

It is a lot easier to escape a spider web than it is to escape sin. You can brush a spider web off of you and remove it eventually. Sin requires assistance only the Lord can provide [Psalm 51:2, 1 John 1:9].

Are you alert? Are you watching out for trouble so you can avoid it?

Be alert. Take refuge in Him.