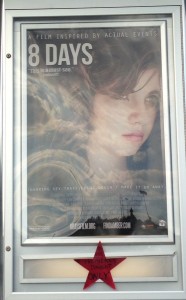 Have you heard of the movie 8 Days? It is a movie that is traveling the country in Studio Movie Grill theaters around the country. It was produced by After Eden Studios Production.

The Atlanta premiere was last night at the Studio Movie Grill on Holcomb Bridge Road. The majority of the cast attended the premiere and were on hand to take pictures and answer questions about the film. 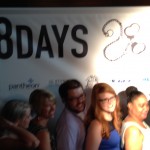 Jaco and Philippa Booyens learned about the issue of domestic minor sex trafficking (DMST) and were greatly disturbed by it. They felt they had to use their craft to draw awareness and enlist people across the country to join the fight.

Philippa, wrote the story and screenplay for 8 Days, said it was inspired by actual events and based on much research. As I researched the people behind the story, I learned why Jaco Booyens is so passionate about this issue. His own sister was trafficked for six years. He only learned of her story years after she had escaped. Read more here.

Jaco shared during filming the scene of the hotel raid with Homeland Security for the movie they had to stop filming so the officers could deal with a real trafficking situation taking places two rooms down from where they were shooting.

It was such an honor to hear Jaco speak about the film. He shared how the actors and actresses freely gave of their time and talents so the proceeds from this film will remain in the cities where it is viewed financially supporting the front line organizations in those cities. Jaco shared that Studio Movie Grill graciously said After Eden Productions would have access to their theaters nationwide for as long as they need to fight this issue to save the children. 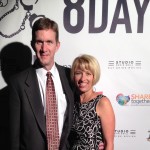 I had the opportunity to speak with Kim Baldwin, the actress that plays BB in the movie. She shared how she had a hard time preparing for her role. She was so friendly and greeted me with a hug when we first met, as if we had been longtime friends reconnecting. This was very different from the character she plays in the movie.

Kim, aka. BB, plays the role of the Bottom, which is a term used in the life. Basically, the Bottom is like the warden. Her job is to supervise the other girls, train them, reprimand them when necessary, and report back to the pimp. She may also place the ads, book clients and collect money for the pimp.

The Bottom is not excused from turning tricks, she just has to do less because of her supervisory position. The pimp makes sure the Bottom knows at all times that she is one step away from being replaced by another one of his girls. This breeds loyalty to him and causes her to do her job, even when it means turning on another victim.

Mrs. America, Austen Williams, has endorsed the movie and is using her platform to raise awareness of the issue. She was also on hand last night to answer questions and take photos with people. While we aren’t all Mrs. America or have her platform, we all have a platform of our own, no matter how big or small. With social media today, we have a greater opportunity to have more people hear our message than any other time in history. Leverage whatever platform you may have to draw attention to this issue and rally others to get involved in the fight for freedom.

The movie was partially like a documentary, with some narration from the main character, Amber, played by Nicole Smolen. In a scene in the courtroom, when Amber is on the witness stand, she states that she was rescued because of her mother and her mother’s friends speaking up for her, searching for her, raising awareness. Proverbs 31:8 calls us all to speak up for those who cannot speak for themselves. I frequently ask you to raise your voice for hope. There are countless Hopes and Ambers out there praying for someone to raise their voice and cry out for them.

I’m asking you to support the movie when it is shown in your area. In Atlanta, the proceeds will go to Out of Darkness, one of my favorite front line organizations. These funds will help keep the doors of the safe houses open and the 24 hour hotline and rescue program operating. Out of Darkness has rescued over 150 women/girls this year alone, and the year isn’t over. By donating to their organization, you become part of the solution.

I’m asking you not to let this happen.

Do not let evil triumph!

Do not let the children of our nation continue to be pillaged for one person’s pleasure and another’s financial gain. Take a stand. Be a voice for hope!

You can watch the interview with the cast and crew here:

You can see the full trailer here: