Is it your responsibility? 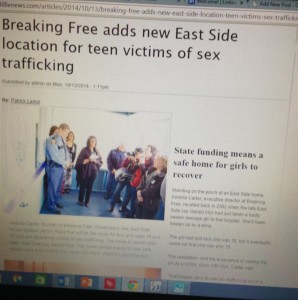 An article I posted this week.

Do you take the time to read articles in your newsfeed on Facebook? Do you click on the links in tweets on Twitter to read further on a topic?

As many of you know, I am a huge advocate for victims of sex trafficking and try to use my social media platforms to raise awareness and hopefully serve as a catalyst for conversation. Once we have the conversation going, we can spur people into action.

We have a huge problem in the United States with sex trafficking. I know it is a global issue; however, I feel we need to take care of the home front before policing other countries. Matthew 7:3-5 may have something to do with that:

I often wonder who takes the time to read the articles I post. Now before you start getting nervous and look over your shoulder, the only way I know if you’ve read the article is by your comments on social media or if you tell me. I can’t even use the “like” button on Facebook or whether you retreet it as a measuring stick, because a lot of people like or share something they haven’t even read themselves. I don’t advise this, but it has been done.

Some people see the article and feel sorry for those caught up in the issue, but do nothing. Others may assume others are taking care of it. It’s not their responsibility. Or is it?

As I pondered this, I was reminded of the poem written by Charles Osgood about responsibility. In case you’re not familiar with it, I’ll share it:

There was a most important job that needed to be done,
And no reason not to do it, there was absolutely none.
But in vital matters such as this, the thing you have to ask
Is who exactly will it be who’ll carry out the task?

Anybody could have told you that Everybody knew
That this was something Somebody would surely have to do.
Nobody was unwilling; Anybody had the ability.
But Nobody believed that it was their responsibility.

But Nobody told Anybody that we are aware of,
That he would be in charge of seeing it was taken care of.
And Nobody took it on himself to follow through,
And do what Everybody thought that Somebody would do.

When what Everybody needed so did not get done at all,
Everybody was complaining that Somebody dropped the ball.
Anybody then could see it was an awful crying shame,
And Everybody looked around for Somebody to blame.

Who is responsible for doing something about the issue of sex trafficking in our nation? Is it you? Is it me? Or is everyone assuming someone else is doing it when actually nobody is? What does Jesus have to say about it? These are the questions I ponder at night.

The King will reply, ‘I tell you the truth, whatever you did for one of the least of these brothers of mine, you did for me.'”

Speak up for those who cannot speak for themselves”

We have a huge problem with sex trafficking in our country. The statistics are staggering to try and wrap your mind around. Everyone doesn’t have to quit their jobs and work at this full time, but clearly we’re all called to do something.