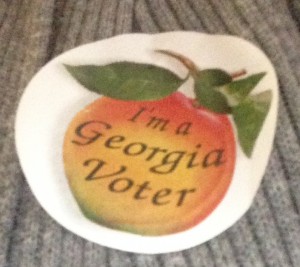 Are you familiar with idioms? An idiom by definition is:

a group of words established by usage as having a meaning not deducible from those of the individual words.”

An example of an idiom is:

The squeaky wheel gets the grease.”

It basically means, the person or persons who make the most noise get noticed.

Today is Election Day, but you didn’t need me to tell you so. If you’re like me, you’ve received a forest full of trees worth of flyers and pamphlets from those running for office. Your phone has rung literally off the hook, thanks to call waiting, with people telling you who you should and shouldn’t vote for today. Television shows have been laden with candidate commercials. Candidates running for office have spent countless hours and dollars trying to find a way to get you to vote for them.

What have you done to prepare for today? Anything?

Have you researched the candidates to see whose voting record lines up with your belief system? Have you watched any debates? Have you had a conversation with  someone running for office or attended a rally to hear their message?

While most of us will never run for office, today is a day for us to walk out Proverbs 31:8,

The list goes on and on. Those we put into office with our vote will be the voice of the state for another term. Their decisions will impact us all. We must raise our voice. We must be the squeaky wheel. Today is the day. It’s time to speak!