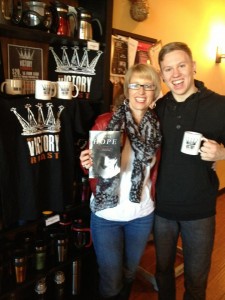 Me with Whit when Rescuing Hope released and the coffee was rebranded.

Are you a coffee lover? Today you get to learn how drinking coffee can help you fight human trafficking in America.

I’m excited to introduce you to a friend of mine, Whit Hagemann. He worked as a barista in a local coffee shop, the Daily Grind, when he first learned about the issue of human trafficking and knew he couldn’t just go on life as usual. He had to do something.

How old were you when you first learned about sex trafficking in America?

I was 18 years old. I heard you speak about the issue and for the first time I noticed how real it was and how close to home it was. I couldn’t just walk away from that. I had to do something.

What did you do with that knowledge?

I wanted to do whatever I could. I worked at a coffee shop and played around with music. I wasn’t sure what I could do, but I wanted to do something.

I wanted to see if our coffee shop could do anything about it. I invented the drink, Victory in a Cup. I made it for a few friends of mine who were customers and they really liked it, so I asked the management if we could put it on the menu at the coffee shop. I wanted to use it to raise money for the cause of human trafficking. The management was very supportive of that idea.

Victory in a Cup raised over a thousand dollars the first year. That’s not bad for a local coffee shop.

What did you do with the money raised?

We gave it directly to Wellspring Living. We knew they were making a difference with girls in Metro Atlanta.

How did you go from Victory in a Cup to Whit’s Victory Coffee? 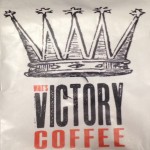 A year after Victory in a Cup proved successful we decided to rebrand the coffee sold in the coffee shop and label it as Whit’s Victory Coffee. We made sure the packaging provided information about human trafficking for customers. We agreed to give a portion of the proceeds to front line organizations.

This year alone, Whit’s Victory Coffee has give $6000 to front line organizations to help fund their work.

How did you market the coffee?

Social networking was the best way to market it. We talked with churches in the area that already enjoyed our coffee and shared the purpose behind our rebranding so they would continue to purchase it and step into the fight.

We used social media with hashtags like #coffeelover #coffeeaddict to attract attention. We would “like” photos of people with coffee or other coffee shops so they would look into our site and connect. As people learned about us, they learned about human trafficking. It was a creative way to spread the word.

I would love to see the coffee continue to grow and support the fight against trafficking.

Whit’s Victory Coffee has over 4000 followers on Instagram and over 900 likes on Facebook to date. They’re continuing to grow in popularity as people give Victory Coffee as gifts.

If you’re a coffee lover and would love to support the fight against human trafficking, check our Whit’s Victory Coffee at www.whitsvictorycoffee.com. It is currently sold online in 32 states. If you’re in the Metro Atlanta area, stop by The Daily Grind, where Whit used to work as a barista, and the place where  Whit’s Victory Coffee started.

Whit no longer works at the Daily Grind, but he is still looking for creative opportunities to fight human trafficking. He is in the process of recording a new CD that helps raise awareness. I will keep you posted on where to find it when it releases. Until then, you can find some of Whit’s earlier music on iTunes or Spotify or by going to Noisetrade by clicking here for a free download.