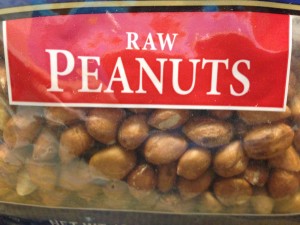 Do you have a favorite Christmas treat that you make every year? I can’t make it through a Christmas season without making sugared nuts. My family devours them.Our neighbors wait for them. I’ve even had a friend call and remind me this year that he is supposed to be on the list to receive them. I’ve made pecans in the past, but they’ve gotten so expensive that I tried a new recipe for sugared peanuts and they seem to disappear as quickly as the pecans.

You start with raw nuts. Then you coat them in a sugar mixture and place them in the oven to bake. They come out of the oven to get stirred up a bit and then back in the oven they go. Back and forth. In the heat, out of the heat. After they’ve been in and out of the heat several times, they’re done. It’s the hot oven that does the magic. That’s what takes them from raw nuts to something that draws people out of the woodwork. I can’t put them in tins fast enough. 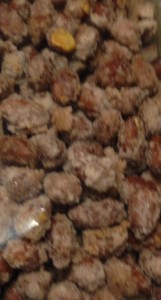 We can all see how the heat makes the peanuts better, but we don’t particularly like going into the heat, aka. hard or difficult situations in life. We want to do great things for God, we want to be used by Him in amazing ways, we want our lives to count for something, but we don’t want to experience any difficulty or hardship. It just doesn’t work that way.

Look at Hebrews 11. It it called the Hall of Faith by many, because it lists name after name of men and women of God, like Abraham, Noah, and Rahab, who did amazing things for the Kingdom. All of them are names you and I recognize. All of them went into the heat, multiple times.

Think about some of the most quoted people of faith outside of the Bible:

We want the impact without going through the struggle. It just doesn’t work that way. Struggle is a part of life [John 16:33].

It’s not called the Refiner’s Fire for nothing. In a refinery, the silver master places silver in and out of the fire multiple times, burning off all of the impurities, called the dross, so he is left with pure silver. Then he is able to shape it into a product of value and worth. The Master does the same with us. He allows us to go through hardships and difficulties in life because He knows the end result will be valuable [Zechariah 13:9, 1 Peter 1:7, and Isaiah 48:10].

Whether your in a season of extreme heat or if you’ve been removed from it for a while, embrace where you are. Recognize you aren’t being punished. You’re being shaped and molded into something of extreme value and worth. Just like the silversmith knows his masterpiece is ready when he can see his reflection in it, the Father will know we’re ready when He sees Himself in us.