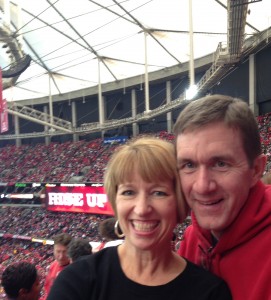 Have you seen the commercial for the Atlanta Falcons with Samuel L. Jackson? The slogan from it is Rise Up! If you haven’t seen it, check it out here. He says,

“I gotta ask you something. What are we all here to do?”

Mark and I were invited to a Falcons game with friends. We’ve never attending a NFL game before, so we jumped at the chance.

I was surprised to see just as many Pittsburgh Steelers fans there as Atlanta Falcons fans. In fact, when we were riding the MARTA to the game, I told him I felt like I was in Pittsburgh instead of Atlanta based on all of the people on the train. People came out of the woodwork to attend this football game. The Georgia Dome can hold 71,228 people and I was shocked to see it was practically full.

The Falcons haven’t had the greatest of seasons, but they also don’t stink. Falcon fans are tried and true. They were all decked out in red and black. Every time the screens would command the fans to Rise Up people would be on their feet, making more noise than a freight train. It was crazy fun.

I must have had a glazed-over look on my face, because my friend looked at me and asked what I was thinking about so intently. I’m sure my response wasn’t what she was expecting.

Did you know when there is a large sporting event like this in the city, the girls’ quotas double?”

Now, I am not Debbie Downer. I don’t constantly think about trafficking, but it is never far from my mind. It can’t help but be after the nightmares I’ve heard about form the ones who have lived it. She was shocked. She immediately shared that with her husband. He, too, couldn’t believe a place known for so many wonderful attractions, like professional sports teams, could also be known for one of the the greatest evils of human history.

Out of curiosity, I decided to do a search in Scripture of the Falcons’ slogan, Rise Up. Psalm 44:26 says,

Rise up and help us; redeem us because of your unfailing love.”

This was the cry of David to the Lord, but I am sure there are many held in captivity today that are crying out the same message. Rise up.  Help us! Or Psalm 94:16,

As the church, we are to be the hands and feet of Jesus. We are to be the ones who rise up and make a difference. All of heaven is calling out for us to rise up. Much like the Falcons game, there are signs all around us telling us we need to rise up. Lives are depending on it.

So, to quote Samuel L. Jackson,

I gotta ask you something. What are we all here to do?”

Will you rise up?