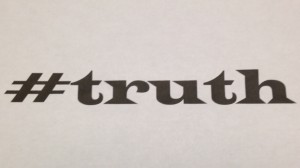 How do you define truth? Webster’s Dictionary defines it as:

the real facts about something;  the things that are true; the quality or state of being true…”

and it defines true as being:

agreeing with the facts; not false; real or genuine. “

The enemy loves taking a bit of truth, adding a few false statements, mixing them together and presenting the revised version as truth. There’s just enough truth in it to be confusing to some. Others buy it as truth because they recognize some of it so they assume it all must be accurate. He did this to Eve in the Book of Genesis.

In Genesis 2:18-25 God put Adam in the Garden and gave him the perimeters for living there. There was one tree he wasn’t supposed to eat from and the reason was it would ultimately lead to his death if he did. God gave that rule to Adam to protect him. Then we meet the serpent in Genesis 3:1 and he questions what God said, causing Eve to do the same. It’s the same technique he uses with us today.

There are rallies, movie screenings, prayer virgules and such drawing attention to this heinous crime with the hope and intention of educating people on the issue and motivating them to step into the fight. This issue impacts us all, whether we realize it or not.

The reality is, the enemy has taken  the facts of human trafficking and twisted them and in some cases completely destroyed them and fed us a meal of lies and myths some people have accepted it as truth. I want to shine a light on some of those myths.

It’s important to know the truth. Educate yourself. Don’t take someone’s word for it. Do your own due diligence so you know what you’re sharing is accurate. Sharing inaccurate information about human trafficking only weakens the message and ultimately hurts the cause.

*As a bonus, I want to share one of my favorite rap songs about truth by Lecrae. Even if you don’t like rap music, take time to listen because it is a powerful message about truth about God and it’s importance. The lyrics are included to help you follow it.