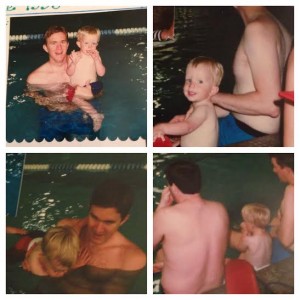 Do you like to swim? I enjoy the water, even though I’m not a very good swimmer. My nephew loves the water; he’s like a little fish. He is turning five years old next week and he has chosen to have a swim party, which is impressive in the middle of January in Colorado. Fortunately, there is a community center nearby with a swimming pool.

Kolby used to be scared of the water. He would play along the edge with his toys, but he didn’t care a thing about getting into the water. He reminded me of Sam when he was little.

Sam loved splashing around in the water, but the idea of jumping in was another thing. When he was two years old, we signed him up for swimming lessons. We wanted him to overcome the fear of jumping in, because he was missing out on a lot of fun.

During his swim lessons the instructor would demonstrate what he needed to do and then it was up to Sam and his daddy to do it. I can see him standing on the side of the pool with Mark in the water waiting to catch him when he jumped,

Aren’t we the same way with God? He brings us to a place of fear, a crisis of belief if you will, and He asks us to jump. The whole time He is standing there with His arms wide open, ready to catch us, if we will just trust Him… jump.

Mark would have drown before he let anything happen to Sam. He adores his son. The same is true about you and the Lord.

For this is what the LORD Almighty says: ‘After he has honored me and has sent me against the nations that have plundered you– for whoever touches you touches the apple of his eye–‘”

If you weren’t able to answer yes to those questions, then it’s time you found out what God thinks about you. Ask Him!

Don’t be afraid. He is enthralled by you and He wants to tell you so. Take a moment, find a quiet place and ask,

Lord, what do you think about me?”

But you have to be willing to sit quietly before Him, for more than thirty seconds, and listen.  Listen with your heart, not your ears. You will be blown away by what He tells you [Jeremiah 33:3]. Write it down. Date it. Then when the enemy tries to tell you that you’re something you’re not, you’ll be able to refer to what God had to say about you [John 10:10].

Now, back to swimming. God is calling you to come into the deep with Him. It is only scary if you don’t think He’ll catch you.

He will catch you!

Every time He calls you to the hard places, to do the hard things, to take a leap of faith, He’s already standing there with His arms open wide, ready to catch you.

So, my dear friend, there is only one thing left to do…..