From Blah to Bling 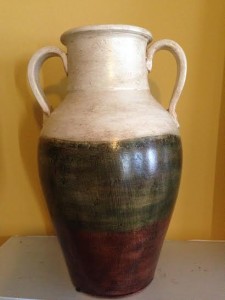 Do you like to shop? My mother used to say I was the poster child for the phrase, Born to Shop. I used to be. Then I asked the Lord to take away my desire for things and He did.  Don’t get me wrong, I still love a good bargain, but I don’t spend my time in the stores.  If I find a bargain it is because I have had a friend call and tell me of a great sale or I just happen upon it.

Once a friend called and declared I had to head to Backyard Structures because they were having the sale of all sales.  My curiosity got me and I turned my car around and went to check out this sale of all sales.

When I arrived, I did like any good hunter does… I circled the prey and looked for my target.

There were lots of pretty things, but I wasn’t eager to buy.  Then I saw this beautiful urn.  My mind immediately thought of John 2:7

Jesus said to them, “Fill the water pots with water.” And they filled them up to the brim.

I knew I had to have that urn as a constant reminder of God’s mercy.

Don’t you see, we may feel like just a mom or just a wife or just a banker or just a teacher, but when we allow ourselves to be directed by the Master and we place ourselves in His hands, we become extraordinary.

When the Father looks at you, He doesn’t see what you see.  He sees your potential in His hands.

Gideon is a perfect example of this.  The Israelites were in trouble.  The Midianites were oppressing them at every turn.  A young man named Gideon was threshing wheat in a winepress when the Lord showed up to talk with him. Gideon was from the weakest clan of Manasseh, the smallest of his clan.  Yet when God called out to him, He didn’t say, “Hey runt, come here.”  Judges 6:12 says,

When the angel of the LORD appeared to Gideon, he said, “The LORD is with you, mighty warrior.”

God knew what Gideon would become if he would allow the Lord to work in his life.  When Gideon put his life into the Master’s hands and trusted Him, he became the instrument of deliverance for the people of Israel.

So, what are you waiting for?  Are you willing to place your life in the Master’s hands and completely trust Him?  You will be amazed at what happens if you will.