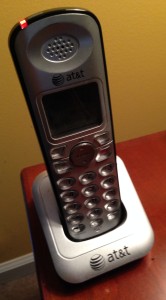 What do you do when bad news comes your way? Do you go into panic mode? Do you start calling everyone you know begging them to join you in prayer? Or do you have a very private panic attack?

Yesterday, my daughter received a long anticipated email from her university. While it wasn’t anything tragic, it wasn’t necessarily the news she wanted. She was disappointed and close to tears when she called to share the news. She said couldn’t really talk then because she was supposed to be meeting people but wanted me to know.

I remember my brother making a similar phone call in college. My mom hung up the phone and stressed over the situation while David went on about his day. It was days before she heard from him. [Remember those were prehistoric times. No cell phones.] She was a wad of concern when he finally called back. His whole tune had changed. He was happy and had all but forgotten their earlier phone call. I guess he figured if Mom was stressed about it then he didn’t need to stress.

In my situation, I refused to let the enemy get me into a stress wad. I had just heard Graham Cooke talk about perspectives and how God wanted to change our lenses to see things as He did. It was time to walk it out.

I went to a tried and true Scripture I’ve clung to multiple times, Romans 8:28,

And we know that in all things God works for the good of those who love Him, who have been called according to His purpose.”

God has a plan. We may not know what it is or see any evidence of it, but He doesn’t just leave us out there flapping in the wind [Joshua 1:9]. Nothing takes Him by surprise. He has a plan. So we can get in a wad over things or we can rest in Him, but we can’t do both.

We have to chose which one we’re going to walk in and own it.

I live in a different city than my daughter. There wasn’t anything I could do about her situation, but God is in her city and mine. He could handle the situation, and in fact, was in the middle of it the whole time. All we had to do was trust Him with it and choose to walk in His peace instead of the anxiety appetizer that was being served up on a silver platter [John 10:10]. In fact, God tells us,

Do not be anxious about anything, but in everything, by prayer and petition, with thanksgiving, present your requests to God.”

When I finally talked with my daughter, she sounded better. Her friends- oh how I love them– pointed out that God must have something better planned for her than she knew to ask. After she talked with her adviser and called later, she was honestly content with the way things turned out. She said in the long run, it would be better for her.

You know the thing I’m the most excited about in this situation? The enemy lost all the way around. He came in to reek havoc in her life, and mine by default, yet he didn’t win a single hand. She didn’t give into the panic. She chose to seek godly counsel. I didn’t give into the panic. I chose to seek the Word of God. In both situations, the enemy lost and the situation was completely over and done with in less than two hours.

Now, I’d like to tell you that’s how we roll, but we aren’t there yet. We are works in progress. But I’m thrilled that is how we handled this situation. Hopefully, we’ll learn from it and choose that route more often than not.

How do you handle bad news?