It Takes More Than Lip Service 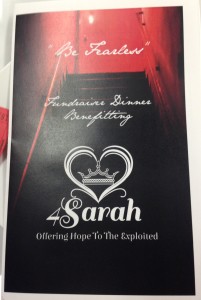 Did you do anything fun or exciting this weekend? I had the opportunity to attend the 4Sarah Benefit Dinner.

This was their first one and I would venture to say it will be an annual event. The purpose of the event was to highlight the work 4Sarah is doing in the fight against commercial sexual exploitation and ask others to partner with them financially so they can reach their goals for 2015.

I love the organization, the staff and the work they do.

Not only do they raise awareness, but these ladies are the rubber meets the road, boots on the ground real deal organization, and they’re changing lives. 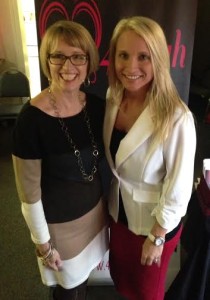 Me with the of 4Sarah, Kasey McClure.

The founder, Kasey McClure, came out of the life herself, so to say she is passionate about the issue is an understatement. She pours her heart and soul into this fight. Last night those who attended the benefit were privileged to hear from some of the recipients of the 4Sarah Scholarship program, a program that helps provide education for those in the life, equipping them to walk away once and for all.

Kasey’s organization isn’t one of the national names you’d recognize in the fight, even though she works at this on a national level. Her organization calls ads on Backpage.com and shares hope with the girls on the other end of the phone. They offer a to listen. They demonstrate that they care.

They offer a hand up, not a hand out. 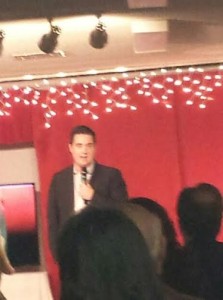 4Sarah will be highlighted on a CNN Freedom Project Special called Routes The New American Slavery, on April 7th. Set your DVRs now so you don’t miss it. Hosted by Jada Pinkett Smith, they will be shining a light on the issue of sexual exploitation in America.

We cannot look the other way.

We cannot pretend this is just a third world issue any longer.

We can’t unlearn what we’ve learned.

We have to step into the fight. It’s not enough just to raise awareness. We have to do something.

One of my favorite sayings in the fight is,

Awareness without action is apathy.”

It kind of reminds me of that old Rich Mullins song, The Screen Door, also called the Submarine Song. The key line is the whole song is,

Faith without works is like a screen door on a submarine.”

Think about it. It would be pointless, right? The same is true if we simply tell people there’s a problem with sexual exploitation in our nation but do nothing about it. It’s pointless!

Now before you get all theological on me and tell me that works don’t save you, I know. I know that Ephesians 2:8-9 says,

For it is by grace you have been saved, through faith– and this not from yourselves, it is the gift of God– not by works, so that no one can boast.”

But I also know that our works are a demonstration of our love for Jesus, out of the overflow, just as His death on the cross is His demonstration of His love for us [John 3:16]. You really can’t separate the two. Just as faith and works go hand and glove, so do awareness and action.

Sexual exploitation is happening in America and it’s here to stay unless people step up to the plate and commit to do more than talk about it. If you’re not sure what to do, contact one of the organizations listed here, and they’ll be happy to help you get plugged into the fight. I know for certain 4Sarah could use your time, energy, talents and resources. Contact them and see what how you can join what they’re doing. Don’t just talk about it, but step into the fight, boots on the ground. When you do, you’ll find your Father is already working there.

For information about how you can support the work of 4Sarah, contact the founder,  Kasey McClure at 404-312-6793.

For your viewing pleasure: