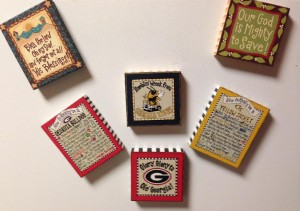 Do you use magnets on your refrigerator? There are times when my refrigerator looks more like a bulletin board. I have tons of family photos on there, wedding invitations, reminders and, my favorite, artwork from my niece and nephews.

I have quite a collection of magnets that I use to hold everything in place. Some of them are weak and slide down the refrigerator over time because the attraction isn’t powerful enough to hold.

My favorite magnets are from Glory Haus. Once you put a Glory Haus magnet in place it isn’t moving until you move it. They are fabulous. The attraction is powerful.

The same was true of Jesus. People were drawn to Him in droves. In the last few days of His life, His friend Lazarus was also causing quite a stir. People were attracted to him as well. John 12:9 it says,

Meanwhile a large crowd of Jews found out that Jesus was there and came, not only because of Him but also to see Lazarus, whom He had raised from the dead.”

Jesus raised Lazarus from the dead. I don’t mean Lazarus killed over in front of Him and started turning blue so Jesus prayed and brought Lazarus back to life. I mean Lazarus was dead, buried and smelled bad. He had been in the tomb for four days.

Just think about that a minute…FOUR DAYS!

Even his sister was concerned about the odor of his decaying body when Jesus asked them to remove the stone. He was g-o-n-e, gone. Yet Jesus determined Lazarus would live and, therefore, Jesus said,

When Jesus said it, Lazarus walked out of the tomb. He obeyed. You can read the entire story in John 11:30-45. It has been suggested that Jesus specified Lazarus by name when He told him to come out of the tomb because otherwise, bodies would have come bursting forth from graves everywhere.

How cool would it be to be Lazarus? To know that people came to Jesus because of what He did for you?

You can experience it. You see, there was nothing special about Lazarus that made him any different than you.

1 Thessalonians 5:24 is one of my favorite verses in the Bible. It says,

Lazarus’ life had Kingdom impact and it was all because of what Jesus did in and through him…. nothing more.

Do you want to have Kingdom impact? Do you want your life to cause others to follow Jesus? Then follow Lazarus’ example. YIELD! Yield to the Master and allow Him to do as He desires in your life and miracles will happen.