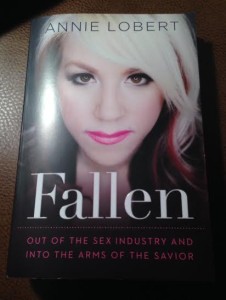 Are you familiar with the organization Hookers for Jesus? It is an organization started by a survivor of sex trafficking, Annie Lobert.

Annie and I will both be speaking at the Take Action Against Human Trafficking conference in Tampa, Florida in November of this year. The conference is sponsored by Bishop Outreach and has a powerhouse list of presenters. Come join us.

I wanted to learn what I could about the other presenters at the conference, so I ordered Annie’s book, Fallen, and I’m so glad I did. I thought I’d share a little with you about the book.

Annie shared how she grew up in a large family in Minneapolis, Minnesota. Because her family moved frequently, Annie also called Illinois and Wisconsin home for a season. Annie’s parents were married and she grew up with siblings. She attended church every week and went to Sunday School. Her upbringing didn’t sound that different from me or the friends I grew up with in North Carolina.

However, Annie, like so many other survivors, was raped at a young age. She was left to deal with not only the physical wounds of the attack, but the mental and emotional wounds. Those cut much deeper and their damage surfaced days, weeks and even months later, as Annie began to see herself as less than.

As I read through the pages of Annie’s story, knots formed in my stomach. It sounded all too familiar. In some ways, it was a mirror image of a young lady I’ve grown to love and care for as a daughter,…a Hope in my world who also worked the high-class call girl circuit for a brutal man who would kiss her one moment and bash her face in the next. If she and Annie were sitting together sharing stories it would be hard to tell where Annie’s story stopped and Hope’s began.

Thankfully, for Annie, she finally hit her bottom and was able to escape. Annie had escaped before, only to go back. It happens. The general public doesn’t understand it and even questions why anyone would do such. They don’t understand. It’s hard to comprehend the hold a trafficker has over his girls.

The trauma bond between trafficker and victim is a form of Stockholm Syndrome. It is a difficult bond to break. Even Annie shared how she didn’t see herself as a trafficking victim until later, after being out of the life and learning about trafficking. It is estimated that it will take a victim 5-7 attempts to leave the life before they are successful.

Fear is a powerful weapon!

Annie didn’t fly completely under the radar while in the life. She had people who realized the trap she was caught in and they reached out to her. A close friend tried to talk with her. He gave her a Gideon Bible and asked her to walk away, but it’s not that easy. A police officer saw something in Annie. He told her she was better than the life she was in and encouraged her to leave. Those weren’t wasted encounters. They were seeds being planted, that eventually took root and grew to give Annie the courage and strength to finally plan her escape from the life.

Annie does a beautiful job of sharing how Jesus reached into the pit and pulled her out. He was her rescuer, the One who stole her heart and showed her what real love is like. He gave her a passion and a calling. He gave her a new dream.

Today, Annie spends time in some of the very areas she was trafficked, reaching out to girls in the life.

Now I cannot wait to meet Annie and give her a hug. She’s one of my heroes. She’s come out of the darkness and not only walks in His marvelous light, but she takes it back to dark places calling out to others who have fallen.

I’ve heard other people on the front lines criticize the name of Annie’s organization, stating that the word hooker is so degrading. Annie explains why she chose the name and the meaning behind it in her book. This is just another reason why we should ask questions instead of assuming we understand things. I’ll let Annie’s own words close us out today:

“Did you know the word hooker doesn’t mean a sex worker? It represents a clipper-style boat from the 1600s made for fishing. Hooker also means a ‘fish hook.’ I’m tired of people thinking that hooker is a dirty word, so I sought to take the name back for God. Jesus said, ‘Follow Me, and I will make you fishers of men’ (Matthew 4:19 NKJV). I am following His lead and casting my line and hook to catch people to hear about the love of Jesus and receive the message of salvation and grace. M passion is to help prostitutes, pimps, and strippers – anyone, really, in the sex trade – to see that there is an abundant life waiting for them to finally live outside of the sex industry.”

Learn more about Annie Lobert and her organization here. If you would like to financially support her work, you can do so here. You can follow her on Facebook here or Twitter here and here.