Are you a magazine reader? I find that I usually only look purchase magazines when I’m traveling by plane, because they’re mindless reading. You know what I mean, the kind of things you read more as time fillers than for content.

I also find that I glance through them in the nail salon. One of the biggest reasons I don’t frequently purchase magazines is because of the messages they send women.

What message could that possibly be, you might ask? The one almost every cover seems to convey,

Your worth is wrapped up in your body, not your mind, heart or soul. You’re valued by how you look rather than what you think or what you accomplish.”

I wonder if she thought through the photograph. Was she comfortable with it? Did she realize by posing that way the focus shifted from her dynamic abilities as an accomplished golfer on the LPGA tour to her boobs? Media is clearly sending a message to our daughters,

It doesn’t matter how hard you work or what you accomplish in life, at the end of the day you are little more than an object of lust.”

The sad reality is Lexi Thompson is quite an accomplished golfer. A quick Google search revealed she made her debut on the national golf scene at age 12 and by age 16 was a winner on the LPGA tour. That’s phenomenal. So why was she dubbed down as nothing more than boobs on the cover of a magazine?

She is more than boobs. Every woman is; however, our society has become so overly sexualize that we belittle women into nothing more than objects to be viewed, used and discarded.

Somehow I ended up receiving a subscription to Seventeen magazine. I didn’t order it and I haven’t paid for it. It just 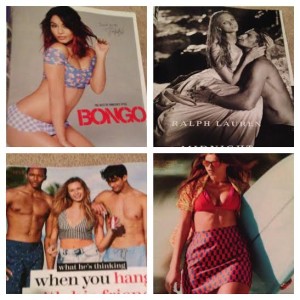 keeps coming to my house with my name on it. I have found it interesting to flip through and see what messages this particular media outlet is sending to our youth. This month, there’s an article called “Play Up Your Shape in Bold Swimsuits” followed by adds of scantily dressed men and women in suggestive poses. This magazine’s target audience is teenage girls so the messages in it are clearly sent to THEM.

So why am I on this bandwagon this morning? Because, it is magazine covers and other print material targeted at our youth, as well as sitcoms that make degrading comments about women’s bodies  followed by canned laughter that begin the desensitization of our culture. They help fuel the fire that says it is okay to purchase another human being for your own personal pleasure, do whatever you want to with them since you paid for them for an hour, and then cast them aside.

Sex trafficking would not continue to thrive if there wasn’t a demand for it. This type of media helps cause the demand to thrive.

Do not arouse or awaken love until it so desires.”

The exact phrase is repeated again in Song of Solomon 3:5 and 8:4. God doesn’t waste anything, especially time. If He took the time to have that message repeated three times it’s because He wants us to pay attention. It’s important.

Our children are being exposed to things long before they’re ready to process it and act upon it in a healthy manner. God warned us not to let this happen. And yet it does, more times than we can count.

The National Sexual Violence Resource Center states that one in four girls and one in six boys will be victims of sexual assault before they turn eighteen years old. In many cases, the perpetrator is another minor. How does this happen? How would one child even know about sexually assaulting another? It happens frequently and you can learn more about it here.

April is National Child Abuse Prevention Month. As such, would you take a stand against media that perpetuates the objectification of women and youth? It is the kenneling used to start the fire of lust in our society. Our women and children are worth more. It’s time we started communicating it as a nation.