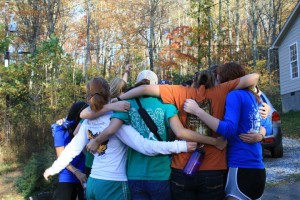 Are you involved in the anti-trafficking movement? I continually find myself amazing by the people who haven’t even heard about human trafficking, let alone the number of people who want no part of the fight.

I have often said this is not a Christian issue or a Jewish or Buddhist or Muslim issue. It is a human race issue.

This evil impacts every demographic of man and it is going to take all of us working together to eradicate it.

I am thankful for the people who understand this, but there are plenty who don’t. I spoke in one city where a lady declared,

I am 74 years old. I don’t understand how this could possibly have anything to do with me and why I need to hear about it.”

I heard her share that with a friend as she was walking into the meeting room. She had no idea she had just walked by the speaker. When I was introduced, I stood and gave my words of welcome and thanked them for having me, then I launched into my message. My opener? Well, it went something like this:

I am sure there are some of you here tonight who are thinking ‘Why on earth am I here? What does this have to do with me? Why do  I need to hear about it?'”

I thought that sweet lady was going to have a heart attack in her seat. I never made eye contact with her because I didn’t want her to feel convicted, but I did keep watch out of the corner of my eye. I truly wanted to educate her and let her know there was a seat at the table for her, a place for her in the fight. You see, my way of thinking is, if you’re still breathing, then God isn’t done with you on this earth. There are still things for you to do. Thankfully, at another venue, an organization I partner with was sharing ways people could get involved and a precious 78 year old man recognized a need and signed up to be part of their team. He has agreed to be a driver for one of their rescue teams.

We are all needed in the fight.

Just like this evil is not a respecter of persons, this war can be won one battle at a time. One demographic that experiences great frustration in this fight is the youth. Most front line organizations require that you be 21 before you can volunteer, especially with survivors. After all, they’re only children, right?

Don’t let anyone look down on you because you are young, but set an example for the believers in speech, in life, in love, in faith and in purity.”

You will rarely find a more committed group of people to rally behind a cause than young people who fully understand and embrace it. Instead of discouraging them by telling them to wait to join the fight, we should be fanning the flame that’s inside of them calling them to step in and take a stand. I have been privileged to meet some of the great warriors in this fight through social media and I’ve read about others in the news. I’ll share a few of my heroes of the fight with you.

First, a young lady who was 8 years old heard about human trafficking at school, not in great detail mind you, but she heard enough to be moved by it. Se wanted to do something about it. What could an 8 year old possibly do in this monstrous fight? How could she possibly make a difference? Well, I’ll tell you….

…she responded by doing what she had probably done many times before, but this time she did it with purpose.

She set up a lemonade stand in her community. Do you want to guess how much money she raised for the cause? Go ahead, take a guess? You won’t get it right unless you read the article, because no one would ever fathom an 8 year old would raise $150,000 to fight human trafficking. If you’d like to read about her story, you can do so here.

Next, I read an article about two 17 year old high school students who started a anti-trafficking social media campaign called We Are Free Campaign, as part of a school project. I reached out to them and what I learned is amazing. They began Tweeting about human trafficking on Twitter, a social media sight. They would put quotes, information and events out for others to learn about. What happened next blew their minds.

A girl their age responded to one of their tweets in a direct message (that makes it private) and told them she was a victim of trafficking and wanted to know how she could get out of the life.

They freaked out for a minute or two and then they stepped into action. They reached out to the National Hotline for Human Trafficking (1-888-373-7888), which is monitored by Polaris. Polaris was able to coordinate a rescue of the victim and now this young lady is safe, all because two 17 year old girls chose to step into the fight. I was so impressed with what they have done, I wrote a blog post about them. You can read it here.

It doesn’t matter how old you are, you are needed in this fight.

There is something for everyone to do. If you can’t possibly think of how you could make a difference, email me (susan@susannorris.org) and I’ll be happy to help you find a way to plug into the fight. Looking for organizations to partner with and don’t know where to start? Go here for a list of a few. It will help you get started. Find the one that resonates with you and reach out. We’re in the process of filing for non-profit status for Rescuing Hope, Inc. We’d love to have your help.

I don’t care which organization you partner with because we’re all on the same team fighting the same evil. Just step in somewhere. Don’t put it off. Lives are depending on it!