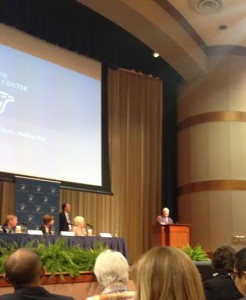 Jimmy Carter at the World Summit to End Sexual Exploitation at the Carter Center.

Have you ever set out for a destination and never made it? You got detoured, distracted or blocked from where you planned to go. This happens in every walk of life. How you respond determines your outcome.

Do you persevere and push your way through the obstacles in front of you? Look for another way? Or do you just stop where you are and decide it’s close enough?

I have seen this many times when working with survivors of sexual exploitation. They get out of the life, where they’re no longer held by a captor only to stop short of their dreams. They move from victim to survivor, but haven’t yet crossed over to thriver.  In some cases, when it gets hard or they meet some form of opposition, they settle for good enough when they were intended for great. Living a different lifestyle in a different environment can be scary. It’s unpredictable. 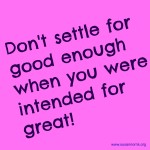 One survivor told me,

It’s easier to go back, because I know what to expect there.”

Sadly, the unfamiliar causes many of us in life to miss out on great in life. We miss God opportunities out of fear, no matter where we are in life.

Terah took his son Abram, his grandson Lot son of Haran, and his daughter-in-law Sarai, the wife of his son Abram, and together they set out from Ur of the Chaldeans to go to Canaan. But when they came to Haran, they settled there.”

Abram’s father left his homeland of Ur and traveled to Haran and stopped. Now if you’ve ever relocated from one place to another, you know that can be hard sometimes. However, some scholars say that Haran was very similar to Ur in many ways, including economically. It wasn’t a real stretch from the familiar for Terah. He was comfortable there. It required little change in his life. To move on to Canaan with Abram would have been hard. It was, after all, an unknown, unpredictable and uncertain. So Terah stayed. He settled for good enough and he missed out on great.

God calls us to step out in faith and trust Him. He wants us to be willing to leave the unfamiliar and go where He sends us.

God’s great for us is anything but ordinary or commonplace so it requires faith for us to get there.

Yesterday, I had the privilege of attending the World Summit to End Human Trafficking at the Carter Center. The room was filled with people who refused to settle for the status quo. The purpose of the summit is to dream big and develop some new ideas that will bring a shift in this evil hidden in plain sight. We are looking at ways to impact this issue in every sector of society. To do so is going to be hard. This monster isn’t going to go down without a fight, but if we’re willing to take those hard steps, I believe we’ll see change.

Why settle for almost? What is ahead of you that looks hard? What’s challenging you? Take the step of faith. You never know if the next step is the one that changes the trajectory of your life.