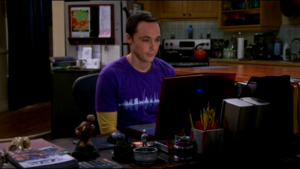 Do you watch television? Mark and I have a few shows we watch, but by far the television is on more now that our kids are home from college.

One program that seems popular with their generation is the Big Bang Theory. I’m not a huge fan of the over sexualized content of the show, but I do love watching the star character, Sheldon Cooper. One of the things he is most notoriously known for is the knock.

When Sheldon wants something, he is tenacious and unrelenting. The other characters know they might as well give in because he won’t stop until he gets his way.

Last night we were discussing the concept of contending prayer at Bible study. I knew the room full of college students and 20-somethings were familiar with Dr. Sheldon Cooper so I used his knocking antics as a visual to demonstrate what it means to go after something without ceasing.

Since the Big Bang Theory wasn’t a hit in Bible times, Jesus shared the parable of the persistent widow. It can be found in Luke 18:2-8,

He said: “In a certain town there was a judge who neither feared God nor cared about men. And there was a widow in that town who kept coming to him with the plea, ‘Grant me justice against my adversary.’ “For some time he refused. But finally he said to himself, ‘Even though I don’t fear God or care about men, yet because this widow keeps bothering me, I will see that she gets justice, so that she won’t eventually wear me out with her coming!'” And the Lord said, “Listen to what the unjust judge says. And will not God bring about justice for his chosen ones, who cry out to Him day and night? Will He keep putting them off? I tell you, He will see that they get justice, and quickly. However, when the Son of Man comes, will He find faith on the earth?”

Too many times we ask God for something once and when we don’t see an immediate response, we walk away dejected. We give up too soon. We need to be a little more like the persistent widow and Sheldon. We need to keep pressing in until we see a change.

What are you asking God to do in your life today? Have you asked once and walked away or are you contending for it, pressing in until you see something happen? Press in. Don’t give up. Keep praying, even it if takes all night. Those who contend in prayer will see a change, either in their situation or in themselves. The results are worth the effort.