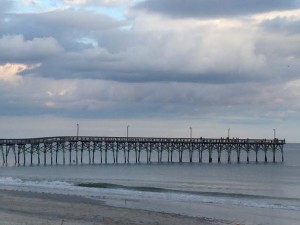 Have you been to the beach this summer? I’ve had the opportunity to go twice. My immediately family went to St. Augustine for a couple of days and then I traveled to the NC coast to see my brother’s family for a few days. 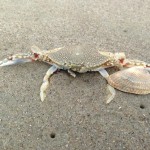 see what we could find. My niece and I came upon a fisherman who caught a three foot shark. Thankfully for us, the shark was out of the water, on the beach, and his future didn’t look so bright (Sorry, I didn’t have my camera with me that morning. I wish I did because the shark was as big as my niece.).

Lately the NC coast has drawn a lot of attention because of shark attacks. This weekend two teens lost limbs due to shark attacks on the same NC beach hours apart. You can read more here.

When asked about it, one woman said,

You didn’t used to hear about shark attacks like this, happening frequently. They were rare. The sharks seem bolder now.”

One shark expert was trying to narrow down the type of shark that likely attacked the teens. People want to know what to look for so others won’t fall victim.

Because of the work I do, I couldn’t help but see a similarity to these shark attack victims and the victims I work with. The only difference is they were attacked by a different kind of shark.

They circle their prey looking for vulnerability before they strike. Their attack, like the swimmers’ attacks, are unprovoked. They fall victim just because they are seen by the shark.

See the similarities? I asked one trafficker I interviewed for a description of the type of girl he looks for when choosing a target. His response?

Breathing. You can take me in any food court in any shopping mall and I can tell you how I’d get any girl I wanted.

The girl who is talking non-stop, the one everyone is listening to… I’d invite her to a party, because she likes to be where the action is, the center of attention. The girl who has acne or is overweight, I’d say, ‘Hey, beautiful,’ cuz nobody calls her beautiful. The girl hanging back from the crowd, maybe looking down instead of making eye contact, I’d ask her what she thinks, cuz she thinks she’s invisible, but she doesn’t want to be. Going to a mall looking for a girl is like shooting fish in a bucket.”

Why do teens fall prey to traffickers? The part of the brain that causes us to think through a possible chain of events is called the frontal lobe. It isn’t fully developed until around age 25 (To read more about this, go here.). This makes our young people very vulnerable to smooth talking sharks.

One way to better equip our young people is to talk with them about the dangers. Make them aware. Just as shark experts are telling beach goers steps to take to make them selves a less likely target for a shark in the ocean, like:

We need to educate our young people on things they can do to protect themselves from a shark attack on land. Some things to keep in mind:

For other tips on safety, go here.

Whether you call them land sharks, traffickers, lions or anything else, there is a real enemy out there and he’s playing for keeps. 1 Peter 5:8 says,

Our young people think they’re invincible. It isn’t totally their fault. They’re brains aren’t fully developed. We can help them become more alert and aware by sharing the dangers with them, so they pay attention. If you don’t think they’ll listen to you, give them a book, like Rescuing Hope. Have them watch a movie, like Chosen.

Educate yourself on the issue of sex trafficking, as well as those you love. We have to take our heads out of the sand and take a stand before someone we know and love falls victim to a shark attack.