Do the Right Thing! 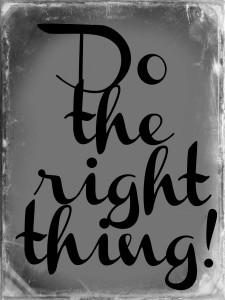 “Do the right thing!”

A motto our parents and our parent’s parents lived by. It is a message that has been passed down from generation to generation. As I’ve taught my children from the beginning,

However, today it appears things are changing, and not always for the best. When an individual loses their job for helping another person, something is wrong in my book.

Sam Samsonov is a 77 year old toll booth worker in the state of Florida helped out a motorist by making up the difference in the toll he paid and what he owed. He didn’t just let the motorist slide and cheat his employer. He paid the difference out of his own pocket, at no loss to his employer; however, he still lost his job over the incident. You can read more about it here.

It only takes a few seconds of listening to Mr. Samsonov speak to realize he loved his job and the community he served. He was being a good Samaritan [Luke 10:25-37]. Luke 10:33 says,

But a Samaritan, as he traveled, came where the man was; and when he saw him, he took pity on him.”

The Samaritan man took pity on the person in need. He had it within his means to meet that need, so he did it. Not for glory or a pat on the back, but because it was the right thing to do. Jesus used that example to applaud the act of the Samaritan and to promote that type of servant heart among the people. Sam Samsonov has that kind of heart. But instead of his employers applauding him for it and talking about how their employees put the people first, he was terminated.

I understand the company has policies. I really do. However, when kindness is penalized, it breaks my heart.

Thankfully, the community Mr. Samsonov served faithfully saw his actions differently. They chose to take a stand for their friend, because that’s how they view Mr. Samsonov, as a friend. They have set up a Community Support Page on Facebook for him. You can read some of the kind words on that board here. You can even leave a kind word yourself.

What are your thoughts?