Cup of tea, anyone? 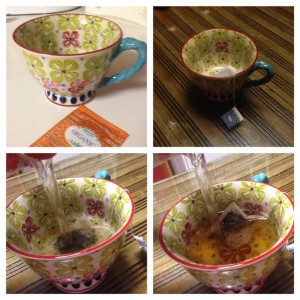 My morning cup of tea.

My brothers were a different story. I won’t tell on them today (they can pay me later), but I will tell on one of their teachers.

When we were in school, back when the dinosaurs roamed the earth, teachers could paddle their students. My younger brother, Steve, had a teacher, Ms. Sharpe,  who warned students when they were teetering on the fence of receiving a paddling. She would say,

You want some hot tea?”

However, she was not British and she wasn’t offering tea and cookies. It meant:

You’re in big trouble and if you did one more thing, you were going to have a bad day.

I’ve wondered for years where she came up with that phrase. All I can assume is she’d heard the phrase, you’re in hot water, and decided to put a little southern spin on it. For those of you who aren’t familiar with that phrase, it generally means:

You’re in trouble OR you’re in a difficult situation where you’re about to get punished.

I thought about that this morning as I made my cup of tea. We all face difficulties from time to time. Those difficulties can come in a variety of packages:

The above is not an exhaustive list. I’m sure you could add to it, but it gets us thinking in the right direction.

Hot water -difficult circumstances- isn’t a fun place to be. None of us would willingly sign or choose them if we had a say in things. Yet, in many cases, it is during difficult situations that we grow the most, learn the most, risk the most. Think about that for a minute.

It is during life’s difficult situations that we grow the most, learn the most, risk the most, and even reap the most.

Think back to the cup of tea with me. A tea bag on it’s own doesn’t do much for you. Oh, it smells nice, but unless you’re going to put it in your dresser drawers as sachet, it doesn’t really help you. But when you put it in hot water, the smells and flavors in the tea bag- the good stuff- comes forth and it can be heavenly.

To gain the full flavor of a cup of tea, you have to let it steep, aka. sit in the hot water a while. Some teas require longer steeping times than others. My friend, Pam Downs, will be so proud that I did learn a thing or two about tea from her when she had her tea shop.

We, like tea, find out what’s inside of us when we’re placed in hot water. Our true flavor, if you will, comes forth.

God allows us to walk through difficulties if the outcome can be used for His purpose and His glory.

Joseph went from a kid just hanging around, running errands for his daddy to being in charge of the greatest nation of the world in his lifetime, yet his journey took him through some hot water. On more than one occasion, it could have appeared as if God had forgotten him, left him to his enemies. But God never left him [Genesis 39:5, Genesis 39:23].

Just remember, when your life feels like nothing but hot water, God might be brewing a lovely cup of tea.