Have you ever been on 285 in Atlanta? It is literally a circle around the city. It connects the major interstates as well as suburbs all around Atlanta.

I will never forget the first time I personally drove on 285. It was the day we moved to Atlanta. Mark was in a car with a child and I was in the other car with a child.

I was supposed to be following him to our new house. It was an emotional day for me because I had just left the city I’d lived in my entire thirty-one years to start a new phase of life in a new city. If that wasn’t stressful enough, we happened to roll into the city close to rush hour.

I was a Nervous Nelly.

I glanced in my rearview mirror to make sure I could change lanes and when I looked back in front of me, Mark was gone. Missing! He had evaporated in thin air. I couldn’t find the car anywhere. I panicked. I had no idea where I was going. I didn’t know what to do.

Cellphones were just starting to make their arrival on the scene and they were mounted in cars, not small devices everyone carried. I had one in my car, but Mark did not, so I couldn’t call him. I called my mama because I knew her number by heart.

I screamed into the phone when she answered. I didn’t know where Mark went. I didn’t know how to get to my new house. I didn’t even know my new address. I was worse than a three year old lost in the mall. I was lost in Atlanta rush hour traffic on 285. I prayed,

God, this is kind of urgent. WHERE’S MARK?”

I’m sure God was laughing a bit. I glanced in the rearview mirror again and there was Mark. Somehow, I had passed him. He took the lead just in time for us to exit off of 285. All was well again.

Since then, I’ve learned my address, I’ve learned how to navigate my way through rush hour traffic where it doesn’t even phase me anymore, and I’ve found that I still do a lot of praying on 285 as
well as the interstates that lead in and out of Atlanta.

Atlanta has been identified as a HUB for human trafficking by the FBI. People are transported all over the city at all hours of the day or night because someone has purchased them like product off a shelf. This has caused me to pray with more frequency and fervor than ever more. 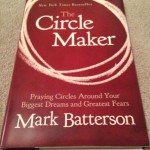 This summer  I had my interns read Mark Batterson’s book, The Circle Maker. We started a Bible study in my home made up of college students from 9 different colleges. We discussed trafficking, a couple of chapters we read for the week and then we would pull out our swords (aka. the Bible, Ephesians 6:17) and intercede for our city. We prayed for those held in captivity, the officers who rescue them, the survivors fighting for a new life, and the front line organizations who fight for freedom. Our group fluctuated between 13-20 people each week. We knew the more voices we could get to join our cry, the stronger it would be. Thus, Circle Atlanta for Hope was birthed.

Circle Atlanta for Hope is a 24 hour event in which people will utilize I-285 as a tool to circle the entire city in prayer. This prayer initiative will include teams of cars choosing an hour and thirty minute timeslot on September 26, 2015 to approach God with specific points over the city of Atlanta and the sex trade within. Although we are spending a full day in prayer, we expect God to move continuously. To be a part of Circle Atlanta for Hope, you can register here.

We need your help. You can:

I want to thank you, in advance, for stepping into the fight. If you believe people should never be bought or sold, then it’s time to do something. Raise your voice for hope!