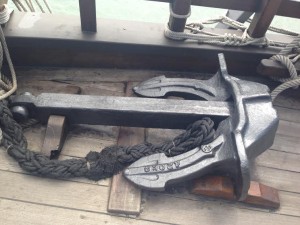 The anchor from the pirate ship in St. Augustine.

Have you ever been on a ship? I’ve had the privilege of going a cruise before. It was quite fabulous.

This summer I had the chance to walk around on a working ship that is a replicated pirate ship. While the ship is fully functioning with bathrooms, a galley, and such, it wasn’t a cruise ship.

The thing that fascinated me the most about this ship was the anchor. It was huge, ginormous, to  steal a word from Elf. They told us how much it weighed, but I was too busy getting an up close and personal view of it to listen.  Just as a point of reference, I did some research on anchor weights and found this written about a new Navy ship,

Each anchor is joined to a heavy chain — with each link on the Bush weighing 365 pounds. The chains, which are more than 2,000 feet in length, are let out into the water when a ship needs to be restrained at sea.”

Anchors and the chains that hold them are not only big but they’re weighty. They can keep a ship from moving when they’re tethered properly to  it.

We have been around the block a few times together so you know where this is going. What are you anchored to? What do you hold fast to that holds you steady when storms come your way? We all have storms in our lives from time to time [John 16:33]. We all need an anchor. Is yours big enough to hold you steady? Is it weighty?

Jesus is an anchor you can trust in during good times and bad. He is big, huge. In fact, we can’t begin to contain Him, no matter how hard we try to put Him in a box. In fact, when I think about Him, His vastness and His reach, I’m reminded of a kids’ worship song I taught when I was the director of vacation Bible School years ago called, Big House. For kicks, you can listen to it if you’d like:

Jesus is also weighty. He will not be beaten. If you’ve read the Book then you know He wins. Having Him as your anchor is a guaranteed victory. It puts you on the winning team.

This hope we have as an anchor of the soul, a hope both sure and steadfast and one which enters within the veil, where Jesus has entered as a forerunner for us, having become a high priest forever according to the order of Melchizedek.”

I don’t know where you are in your journey, if things are fabulous or if you’re walking through extreme circumstances. If you’re like me, it comes and goes in waves. Recently, I’ve been working with a former student who is a heroin addict, trying to get him into rehab, mentoring ten survivors of sex trafficking at various stages of recovery, trying to build the website for Rescuing Hope, Inc. and then just dealing with life in general.

The storms of life can be rough at times. They can blow you off course if you aren’t anchored to something stronger than the storms. In fact, that is the enemy’s plan [John 10:10]. Thankfully, Jesus is stronger than any storm that is thrown your way. As the disciples discovered in Mark 4:41,

Even the wind and the waves obey Him!”

He’s the best anchor around. Why not cling to Him and trust Him to hold you steady in the strongest of storms?