This calls for war! 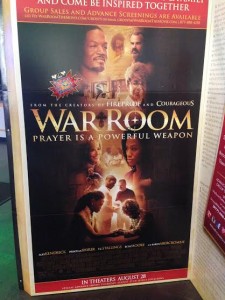 Have you seen the movie War Room yet? It released this past week and is doing quite well in the box office, ranking number 2 this weekend and bringing in an estimated $10.7M.

It is proving, by it’s own tagline, that prayer is a powerful weapon. As the fifth movie made by the Kendrick Brothers, War Room starred some recognizable faces in the faith community.

If I were the enemy of the Church, which we do have a very real enemy, if I were the enemy what I would try to do is diffuse the power of the most potent weapon their adversary has.  I would try to target whatever I know can do the most damage to me, my efforts, and my strategies.  Then cause them to think it’s not as powerful as it is.  I think this has been one of the enemy’s ploys against the Church.  He has done his best to cause us to heighten the importance of everything else except prayer.  So, we focus on the preaching, the singing, the aesthetics of our building, on the programs – all of those are fantastic, we need those things – but we have simultaneously and unknowingly downplayed the significance of the most potent weapon. Jesus said, “My house shall be called a house of prayer.”  So, if we get back to those basics there is no telling what kind of revival is going to break out, not only in our churches but in our families and personal lives as well.”

While Beth Moore and Priscilla Shrier were the most recognizable faces in the movie, Karen Abercrombie stole the show in her role as Miss Clara. Her dry wit, wisdom, and candor made her very endearing to viewers, not to mention her powerful prayers which often yielded standing ovations in theaters. I dare say most viewers would love to share a cup of coffee with Miss Clara, a very hot cup of coffee.

When asked about the movie, Franklin Graham of Samaritan’s Purse said,

The wake of War Room’s impact will be immeasurable.”

Miss Clara (Abercrombie) taught real estate agent, Elizabeth Jordan (Shrier), about the power of prayer and how to use prayer to fight her battles in life. Miss Clara would spend one hour a week with Elizabeth, sharing her wisdom and training her for battle. She referenced a Ephesians 6:10-18 in her teaching,

Finally, be strong in the Lord and in his mighty power. Put on the full armor of God so that you can take your stand against the devil’s schemes. For our struggle is not against flesh and blood, but against the rulers, against the authorities, against the powers of this dark world and against the spiritual forces of evil in the heavenly realms. Therefore put on the full armor of God, so that when the day of evil comes, you may be able to stand your ground, and after you have done everything, to stand. Stand firm then, with the belt of truth buckled around your waist, with the breastplate of righteousness in place, and with your feet fitted with the readiness that comes from the gospel of peace. In addition to all this, take up the shield of faith, with which you can extinguish all the flaming arrows of the evil one. Take the helmet of salvation and the sword of the Spirit, which is the word of God. And pray in the Spirit on all occasions with all kinds of prayers and requests. With this in mind, be alert and always keep on praying for all the saints.”

My husband and I thoroughly enjoyed the movie. I believe all believers who view it will be challenged to pray more frequently, no matter how much prayer is apart of their lives currently.

For those of you who haven’t seen it yet, I’ll leave you with this: