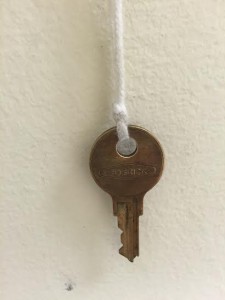 Do you ever lose things, or is it just me? Yesterday, I was looking for something I need next week and it wasn’t where it should be. Do you ever have that happen?

I was bound and determined to find it, so I launched into an all out search through my house. I cleaned out filing cabinets, drawers, closets, and I’m not finished yet.

I have yet to find the item I’m looking for, but I have stumbled across many other treasures along the way. I was able to fill a huge box with cards and notes I’ve collected over the years from my husband and children. This makes the third or forth box I now have of things just from them. It melted my heart to pause and read a few of them, especially those with my name printed in elementary handwriting on the outside.

I also came across a variety of photos that have not seen the light of day in ages. Like this one of me when I was not even 20 years old. When I sent it to my daughter, she had a few choice comments. She particularly loved the Keds and the fact that my socks and t-shirt matched. What can I say? I was a real fashionista back in the day. 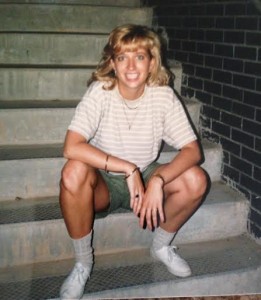 Then there was the photograph of me and my college cohort in crime, Hope Edwards, now Hope Reagan. Clearly Keds were all the rage then.

Hope and I met in the School of Education at UNC Greensboro and were fast friends. 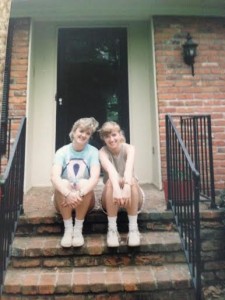 We used to share “teacher stories” whenever we would get together. If you’re a teacher, you completely understand what I’m talking about. For those of you who aren’t, teacher stories are those funny little antidotes from days spent in the classroom. They may include something hilarious a student did or said or they may be very endearing, like several in my heart about this sweet little one from my very first kindergarten class. 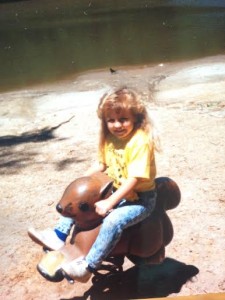 We were on a field trip to the Greensboro Science Center and Zoo. This was Spring of 1990. Danielle is wearing her Coggins Critters class t-shirt and having a ball on the playground. She was so precious and stole my heart early on in the school year. One of my sweetest blessings was when she tracked me down years ago on Facebook.

I also discovered a newspaper clipping from that same time period, so sometime from the late 80s or early 90s. I’m not necessarily a follower of Ann Landers or Dear Abby. In fact, I would usually read them for a laugh, but this obviously struck a chord with me if I cut it out and saved it all of these years. 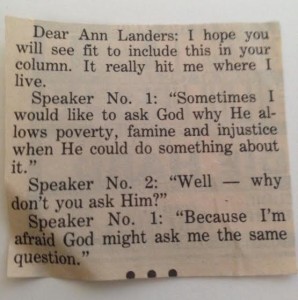 Even then I knew we, as Christians- as members of the human race- were called to get involved when we saw injustice. I knew that to profess to be a follower of Jesus, but to fail to go where He would go or do what He would do was nothing more than words. He states in John 14:12,

I tell you the truth, anyone who has faith in Me will do what I have been doing. He will do even greater things than these, because I am going to the Father.” [emphasis mine]

We aren’t supposed to stand around asking the question: What would Jesus do? We’re supposed to do it. Walk as He would walk, serve as He would serve. That’s the funny thing about being a follower of someone… in order to be a follower you’re actually supposed to follow them.

Now I had a college professor, Dr. William Purkey, who used to say,

Don’t let people should on you!”

Meaning, don’t let others declare you should do this or you should do that. I don’t want to be accused of being someone who should on you. Quite honestly, there’s only One who has the power and authority to tell you what you should be doing and that’s Jesus.

So here’s my challenge to you: Ask Him what you should be doing and then do it. If you choose to act, you could be the key to someone’s freedom, someone’s future.