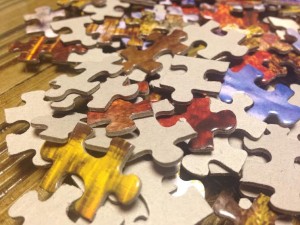 Do you ever take a trip down memory lane? Just a couple of days ago I was cleaning out drawers in my house and stumbled across several old photos. That good for a few laughs. You can read about it here.

Clearly, this must be a memory week for me. Yesterday, I had the opportunity to speak at chapel at North Cobb Christian School, where my children attended for their first few years of school.

A lot has changed about the school. They’ve added buildings, a football team, a new entry road, and the direction carpool drives is reverse from when we attended, which really freaked me out. Many things have stayed the same, though, and it was great to be back.

I typically give a message on sex trafficking when I address students, but that day I felt led to take them down memory lane using the visual aid of puzzle pieces. Allow me to share:

When I was in 10th grade, I had to take PE, and I hated PE. I’m about as athletic as a rock, so it wasn’t natural for me. Somehow, I managed to convince the coach I could organize his office in a semester if I was allowed to work on it during PE time. I had a friend, we’ll call her Dana, who also hated PE. She became my organizational assistant. One day while we cleaned the office, she told me she had been raped in her home by someone she knew. By the time she was finished telling me her story, I felt like I’d been raped too. Hold onto that for a moment.

When I was in college, I decided to study elementary education. I loved it. I was made to teach. Even as a young child I used to line my stuffed animals up and teach them the lesson for the day. I taught elementary school for years and loved every minute of it. I learned how to take concepts and break them into small pieces so my students could comprehend them. Hold that for a moment also.

In 2000, my husband and I hosted a small group from church in our home. We met every week and discussed the sermons or did a book study. We encouraged people to invite friends. One day I opened my front door to a women dressed like a prostitute. She said she was invited to small group. We welcomed her and got to know her. It was then we learned she worked for an escort service trying to keep food on the table and a roof over her son’s head. I learned how emotionally and mentally controlling that industry was and how a mother would do anything, and I mean anything, necessary to take care of her child.

In 2003 our family left North Cobb Christian and went to the public schools. It was a financially forced decision. I volunteered in elementary school in my children’s classes, became room mom and substituted. When my first born went to middle school in 2006 I tried every way imaginable to stay involved so I would know what his world was like and what was happening in it. As a result, I became the sponsor of FCA at the middle school and spent four years of my life working with 11-14 year olds.

In 2010 I left FCA and learned about the issue of sex trafficking. I spent months researching the issue before writing the book Rescuing Hope. The book released on December 31, 2012 and since has sold close to 5,000 copies. Today, I travel the nation raising awareness, started a nonprofit to fight the issue (Rescuing Hope, Inc.), mentor 11 survivors (it was 10 yesterday morning, but then another young lady reached out to me in the afternoon).

I couldn’t have written Rescuing Hope if I didn’t know what it felt like to be raped. I wouldn’t have understood the desperation of a girl in 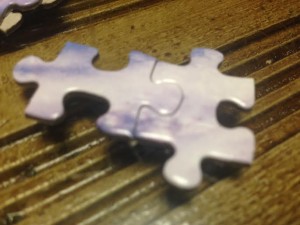 the life if I hadn’t heard first hand from someone who was in it. I wouldn’t know how to take concepts and break them into tiny pieces that are easy for survivors to understand if I hadn’t been given that skill as an educator. If I hadn’t been in the public school working with 11-14 year olds [the average entry age into the sex trade for boys is 11 to 13 and for girls is 12 to 14] I might not have had my heart wrecked to the point of action in the fight against sex trafficking.

While each incident in my life seemed individual and isolated to me, God knew they were connected and He knew how they fit together.

Gather the pieces that are left over. Let nothing be wasted.”

I know that you can do all things; no plan of yours can be thwarted.”

So why did I tell you a bit of my life story and what does it have to do with these two verses? God has a plan for each of our lives. He tells us in Jeremiah 29:11 that He has plans for us, and He wasn’t kidding. The enemy also has plans for us, but according to the above verse in Job, the enemy’s plans will not trump God’s plans for us [John 10:10]. 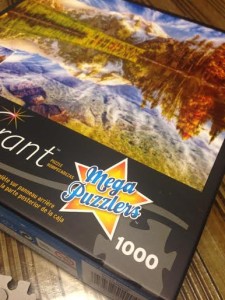 We go through life and wherever we happen to be seems huge, epic in some cases. We see the picture of the situation, but God sees the situation as only one small piece of the bigger picture. Some pieces look good from our vantage point, while others look horrible. God sees all of the pieces as necessary to complete the picture called your life. He wastes nothing and He can take all of those pieces and put them together to create something lovely [Romans 8:28].

The problem arises when we are try to figure out how to navigate life without Him. We don’t know the right direction to walk in and we don’t know how the pieces all fit together.

We don’t have the box top.

Have you ever tried to put together a 1000 piece puzzle without the box top, without knowing what the final picture is supposed to look like? It’s nearly impossible.

God not only has the box top, He painted the picture on it before you were ever created [Jeremiah 1:5]. He knows what the final picture is supposed to look like. He knows what pieces go where. Why not trust Him? Why not seek Him out at every turn to make sense of the situations in your life and learn what comes next?  He’s a pro at putting the pieces together.