DO YOU HAVE A BIG BUT? 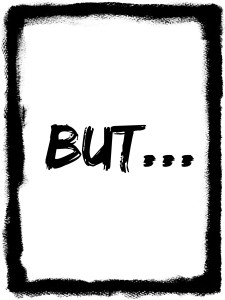 Do you have a big but? I’m not talking about your backside. That would be your butt, and we won’t go there. I’m asking if there’s a but in your life that is keeping you from believing what God’s telling you or what He’s asking you to do.

Abraham is viewed as the father of the Christian faith. In Genesis 15:5, God takes Abram outside to look at the stars and declares that his descendants will be as numerous,

He took him outside and said, “Look up at the heavens and count the stars– if indeed you can count them.” Then he said to him, “So shall your offspring be.”

What was Abraham’s response? Did he start in with,

That’s all well and good, God, but Sarai and I are old people. Have you forgotten our birth dates? Our bodies are shot. Her womb is closed. What you’re saying is impossible. Not. Going. To. Happen!

Of course not. If that was the case, he wouldn’t be viewed as the father of faith and we probably wouldn’t be reading about him thousands of years later. No, Abraham, who at the time was still called Abram, took God at His word. In fact, verse 6 says,

Abram believed the LORD, and he credited it to him as righteousness.”

Abram chose to focus on God instead of his circumstances. He chose to believe the Lord AND because Abram believed the Lord, he was called righteous. What does that mean? It means he was vindicated, justified, right in the eyes of the Lord.

Abraham became the standard of faith that day. In fact, he is one of the few listed in the Hall of Faith found in Hebrews 11 because he believed God and acted accordingly.

Now, before you go off saying, Well of course he did. He’s Abraham, let’s look at him for a minute. There are some things we need to consider before we write him off as someone we couldn’t possibly measure up to. After all, God spoke to him (we’re assuming out loud, although we don’t know).

But doesn’t He speak to us today?

…through the Holy Spirit through the Bible, prayer, circumstances, and the church to reveal Himself, His purposes and His ways.”

Abraham heard the voice of God and dared to believe it. Period.

That’s all he had- the voice of God- and that was enough.

God still speaks to His children. He still make promises to them and He is searching for those who are sold out believers, ready to take Him at His word and do as He commands [2 Chronicles 16:9, Isaiah 6:8].