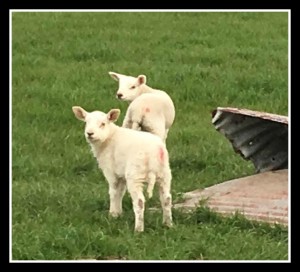 Have you ever been to Scotland? It is a lovely country. While in the United Kingdom, I had the privilege to spend three days in Scotland with a dear friend of mine I’ve mentored since she was in eighth grade. She’s now 23 and on staff with YWAM (Youth with a Mission).

Since we were only in Scotland for 3 days, I wanted to see all I could. We spent the first day in Edinburgh, the second day in the Highlands, and the final day in Glasgow. It was a whirlwind trip to say the least, but I got a taste of Scotland.

One of my favorite things we did was drive up into the Highlands. On our drive back to the YWAM base, we saw lots and lots of sheep… my favorite, of course, were the little lambs. I shared with you earlier how they ran to their father when danger was perceived. You can read about that here.

God used these little lambs to teach me so much while I was there. The morning of our trip to the Highlands, I read 1 John 2:20 in my quiet time,

But you have an anointing from the Holy One, and all of you know the truth.”

To me, that said we have been given a gift. I like to know about the gifts I receive so I  sought out to learn what I could. As I dug a little deeper into the word anointed, I discovered the most beautiful thing. That’s the way it is with God. He has mysteries He has planted in His Word. Not to keep them from us, but to allow us to find them like treasure hunters [Jeremiah 33:3]. It can be so much fun and so rewarding, if you’re willing to put in the effort.

The origin of anointing dates back to a practice of shepherds. Don’t miss this! I am so excited, I’m bouncing up and down in my chair as I type this.

Lice and other insects would often get into the wool of sheep and when they got near the sheep’s head, they would burrow into a sheep’s ears and kill the sheep.

In an attempt to protect and defend their sheep, ancient shepherds would pour oil on the heads of their sheep. This made the wool slippery making it impossible for the insects to get near the sheep’s ears because the insects would slide off. From this anointing came the symbolic blessing, protection and empowerment of anointing someone’s head. BOOM!

Now does that excite anyone else? Does that make you say,

Take that, Satan! My Daddy is so much bigger and better than you.”

This excites me to no end. The Lord, our Shepherd, anoints us to know the truth. That means when insects, ie. the enemy, comes buzzing around our ears, trying to get us to believe his lies that will lead to our destruction and death, they can’t stick. They can’t stick as long as we stay in the anointing of the shepherd. That’s good stuff, friend.

How do we do that? How do we stay in the anointing?  We stay in the Word of God and cling to it’s truth as the life giving truth it is.

Many of us may have had things spoken to us, over us or about us that are hurtful, wounding and if left to fester, could lead to our death. But God has given us His Word to learn, meditate on and hide in our hearts and minds [Joshua 1:8, Deuteronomy 6:6-9].

When we have God’s Word seared in our minds and hearts, we know who we are and Whose we are and the words of the enemy can’t stick.

The next time you see a little lamb, you can say thank you for this revelation. Baaa!